After largely fading from the discussion since their initial rise to prominence in late 2017/early 2018 (and subsequent rapid fall from grace), cryptocurrencies have returned to fore again in recent months. As such, it is worthwhile to once again look into these financial innovations and assess their value and potential.

In the simplest terms, a cryptocurrency (such as Bitcoin, Ethereum and Litecoin among others), is a type of money that uses software encryption techniques to create a secure environment for transactions.

By design, cryptocurrencies are decentralized; meaning they are not controlled by a central bank or government and do not require a financial intermediary, since the transactions can be done peer-to-peer. In addition, cryptocurrencies have a finite and known supply — their purchasing power cannot abruptly deteriorate because of a sudden increase in supply, which results in too much money chasing too few goods (new units are “mined” through complex computer and energy-intensive processes). Of course, the supply constraints only apply to each individual cryptocurrency — the aggregate supply of cryptocurrencies has increased as new variants have been introduced to the marketplace, even if these entrants have not seen the same level of adoption of the larger first-movers in this space.

In this sense, cryptocurrencies are similar to gold, a finite resource of which the supply is beyond the control of governments and that has also been used throughout history as a form of currency. Unlike physical gold, however, cryptocurrencies are easily transportable and thus far more practical.

Similar to transactions conducted with gold, there is no paper trail with cryptocurrencies, which means they can be used anonymously — while the records of transactions are maintained by the underlying technology, called the “blockchain,” it is impossible to analyze transaction flows. This characteristic explains why cryptocurrencies have been quickly adopted for criminal activity, including narcotics trafficking, money laundering, tax evasion and capital controls.

This aspect of cryptocurrencies also serves as a drawback: it makes them “bearer,” meaning that there is no claim on them aside from physical possession. As such, should the computer storing the cryptocurrencies be wiped out, have its contents stolen by hackers or, if the owner simply forgets the password, they are lost, just as if gold bricks were misplaced.

A very important distinction between cryptocurrencies and more “standard” currencies is that they do not, as yet, meet the general definitional requirements of what is considered as “money.”

Money serves two main purposes: as a medium of exchange and as a store of value.

In general, to use cryptocurrencies to actually buy something requires converting them into a traditional (or “fiat”) currency — while digital payments processors are moving to help enable this conversion, it is still an additional transaction with a (typically steep) added cost.

A main reason for the slow adoption of cryptocurrencies as a medium of exchange relates to the second aspect of “money” – the store of value. Cryptocurrencies have exhibited extreme volatility, with their valuations moving sharply on a day-to-day basis. For example, the standard deviation1 of the daily moves in Bitcoin over the last five years is 4.5%, meaning that a “normal” day will see its value change somewhere between +4.5% and -4.5%, as shown on the chart below. For comparison, the equivalent standard deviation is 0.5% for the Canadian dollar and 1.1% for the S&P/TSX Composite Price Index. 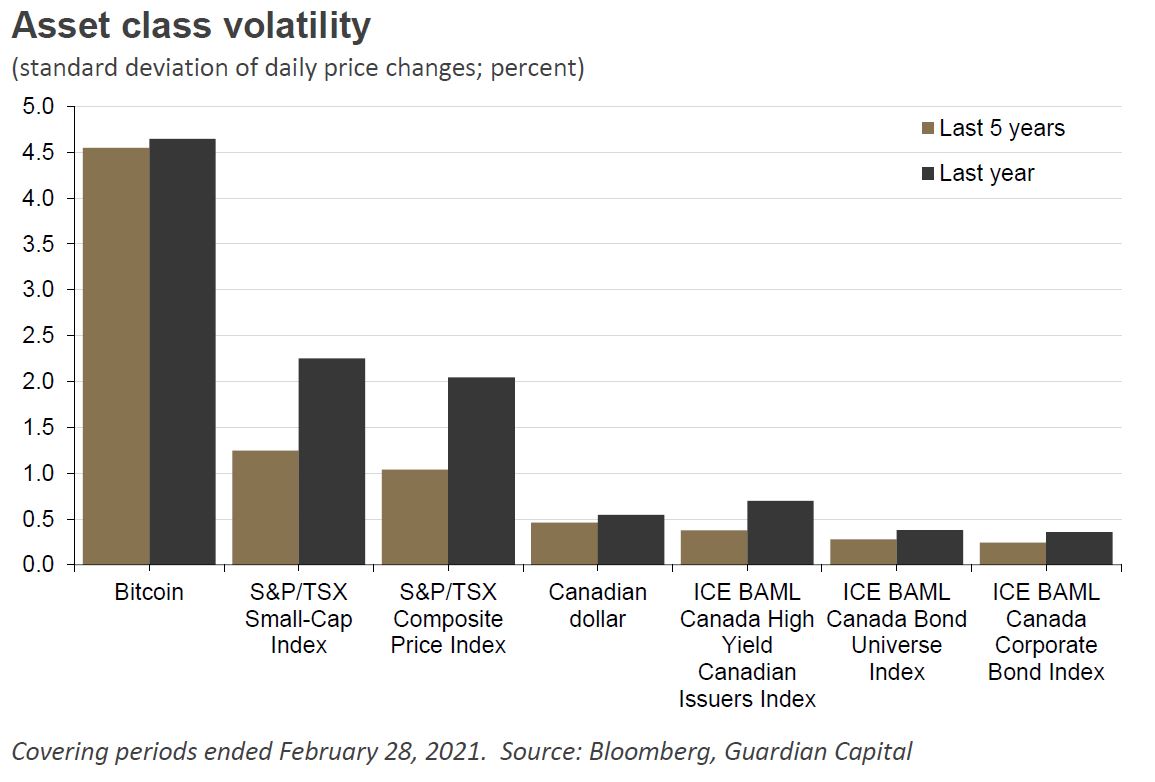 Given the sizeable movements on a day-to-day basis — not to mention that Bitcoin has previously recorded a substantial rise and fall (the US dollar price of Bitcoin surged 1,400% in 2017 before losing 75% of its value in 2018) — it is understandable that there might not be the highest degree of confidence that its current value will store for a prolonged period.

One factor influencing the “store of value” function of a cryptocurrency is that, in contrast to other financial assets, there is arguably no underlying fundamental value — and here you need to separate the cryptocurrency and the technology that underpins it (blockchain technology has many possible applications and is being developed in a range of different industries).

An equity is a claim on the earnings of a company; a bond is a claim against its guarantor with the promise of repayment; even gold has an intrinsic value based on its use in jewelry and industrial purposes (gold is a very good, albeit expensive, conductor of electricity).

The value of a cryptocurrency is dependent on supply being limited (which is not necessarily the case in aggregate) and the expectation that demand will rise — which is speculation by its very definition. Cryptocurrencies provide no claims on assets and offer no cash flows. They are viewed as having value because there is somebody out there willing to pay more for them on the speculation that increasing demand will push prices ever higher (permitting them to sell to somebody else at a higher price).

While there is scope for demand to rise as cryptocurrencies become a more widely used medium of exchange, there are also very real risks that, given their use in more illicit transactions, governments could clamp down and stifle their broader and more legitimate demand in the name of the public good.

It is easy to get caught up in “irrational exuberance,” to borrow from former Fed Chairman Alan Greenspan. With dreams of getting rich quick leading to chasing the market and buying an asset, despite its valuation and inherent risks, with the expectation of seeing the price rise even higher (Bitcoin’s US dollar price rose 300% in 2020 and is up another 75% so far this year). 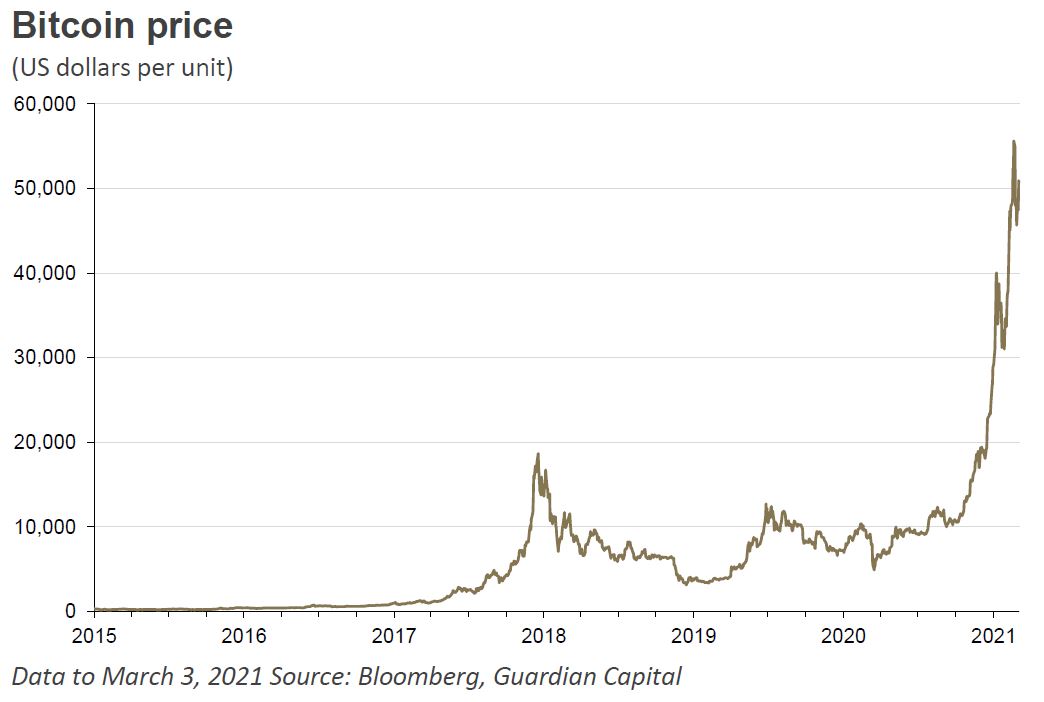 History, however, is replete with examples of why this approach to “investing” (or speculating) ultimately does not pay off — just ask anybody who bought tulips in January 1637,1 or tech stocks in March 2000.2

Buyers of cryptocurrencies should be aware that the true value of these investments might prove to be cryptic for years to come, and as such, are not soon likely to displace traditional asset classes in the mindshare of the majority.

1. Tulip mania: The flowers that cost more than houses, released May 3, 2016.
BBC.com (https://www.bbc.com/culture/article/20160419-tulip-mania-the-flowers-that-cost-more-than-houses)

This commentary is for general informational purposes only and does not constitute investment, legal, accounting, tax advice or a recommendation or solicitation to buy, sell or hold a security. This information is not intended for distribution into any jurisdiction where such distribution is restricted by law or regulation. The opinions expressed are as of the published date and are subject to change without notice. Assumptions, opinions and estimates are provided for illustrative purposes only and are subject to significant limitations. Reliance upon this information is at the sole discretion of the reader. This document includes information concerning financial markets that was developed at a particular point in time. This information is subject to change at any time, without notice, and without update. This commentary may also include forward looking statements concerning anticipated results, circumstances, and expectations regarding future events. Forward-looking statements require assumptions to be made and are, therefore, subject to inherent risks and uncertainties. There is significant risk that predictions and other forward looking statements will not prove to be accurate. Investing involves risk. Equity markets are volatile and will increase and decrease in response to economic, political, regulatory and other developments. The risks and potential rewards are usually greater for small companies and companies located in emerging markets. Bond markets and fixed-income securities are sensitive to interest rate movements. Inflation, credit and default risks are all associated with fixed income securities. Diversification may not protect against market risk and loss of principal may result. Certain information contained in this document has been obtained from external parties which we believe to be reliable, however we cannot guarantee its accuracy. 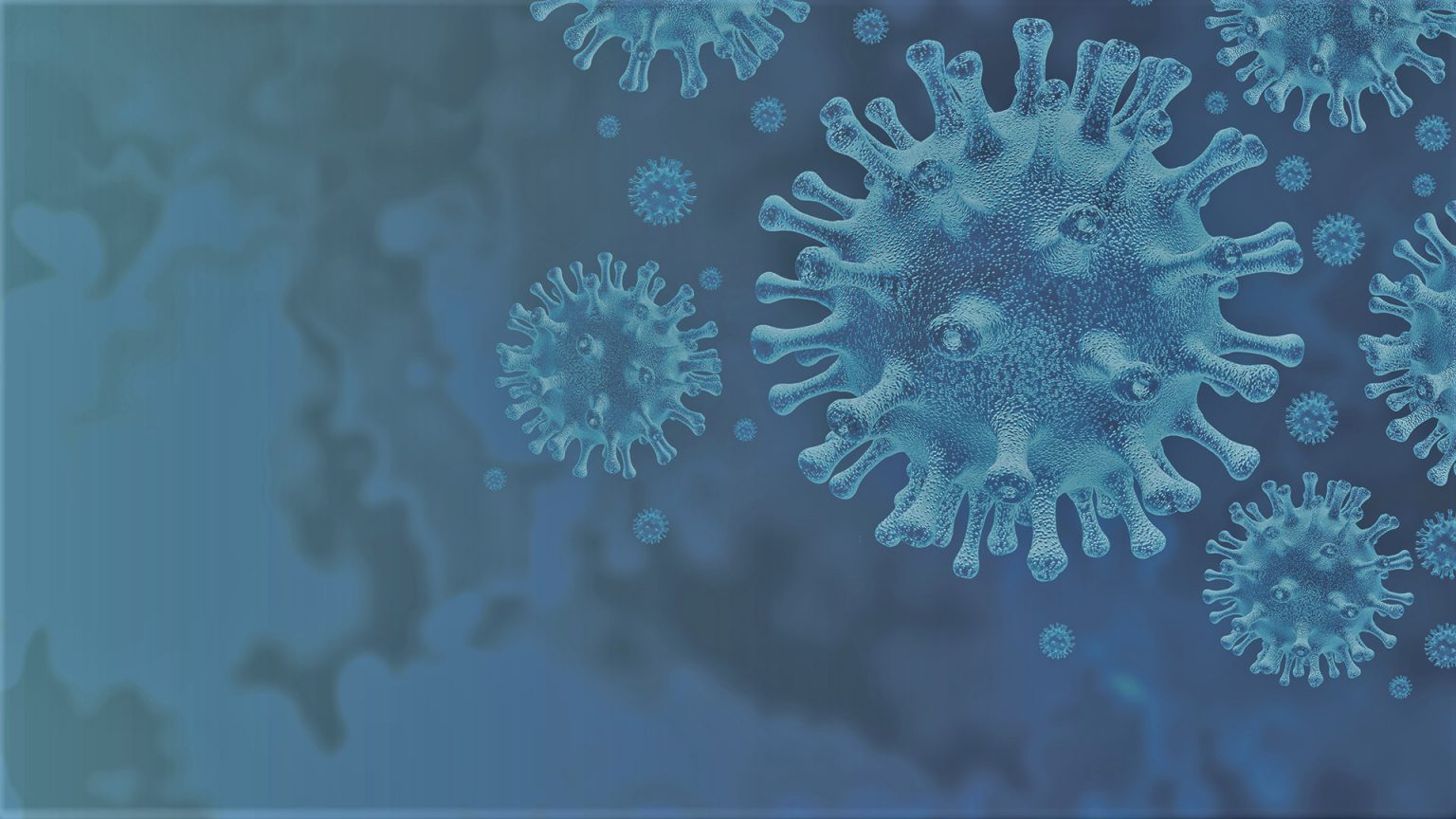 One year ago – March 11, 2020, the WHO officially declared COVID-19 a global pandemic, and the world changed. The combination of lower infection numbers and economic rebounds means the next 12 months appear significantly better than the last 12.

Speak to your financial advisor or our team about guarding your prosperity journey today.
END_OF_DOCUMENT_TOKEN_TO_BE_REPLACED