The Canadian Federal Budget — spending some, but not all, of the fiscal windfall

The Canadian economy has persistently outperformed expectations since the onset of the pandemic, with the stronger-than-anticipated nominal growth (in part reflecting elevated inflation), surprisingly resilient labour markets and robust corporate profits proving to be a boon for government coffers and providing policymakers with some wiggle room.

Even without incorporating the impact of the recent geopolitically-driven upswing in commodity prices (which has meant higher prices for domestically produced and exported natural resources, such as oil, gas, grains, potash and metals; that largely occurred after the government assembled its economic projections¹ in early February), the Federal government’s 2022 Budget² has penciled in much stronger profile for revenues in its plan. The revenues for the just-ended fiscal year were revised up by $24 billion versus the projections in December’s Economic and Fiscal Update³. The next five years were upgraded by an average of $16 billion per year. 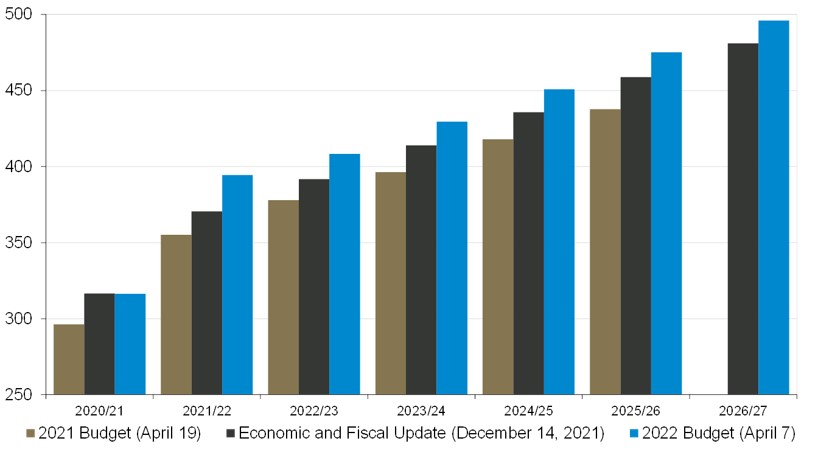 While there were some revenue generation measures introduced in the Budget (I will provide a non-exhaustive list of some of the new measures included in the 304-page document below, the big losers are banks, which are being subjected to a fairly arbitrary cash grab), the bulk of the improvement was passive in nature and simply the product of the stronger economic performance resulting in higher tax revenues. Additionally, it is notable that these gains could reasonably be seen to bring the Budget back in balance by the end of its projection horizon, absent any changes to spending.

But, while indications that the domestic economy is pushing up against capacity constraints would suggest that some fiscal consolidation would be prudent to help mitigate inflationary pressures, the government has opted not to bank the windfall at this time. Instead, the government follows through with promises made on the campaign trail last fall, and adds to its spending plans initiatives, proposed in the Supply and Confidence Agreement⁴ established two weeks ago between the Liberal Party and New Democratic Party. That said, it is worth highlighting that the new measures do focus on addressing supply-side issues by supporting investment (including in housing and green energy) and labour mobility. The added program spending amounts to an increase of only $50 billion over the next five years ($10 billion per year) relative to the fiscal plan presented at the end of 2021; a comparatively constrained amount versus a cumulative increase of at least double that being suggested over the last few weeks.

Moreover, with most of the remaining crisis-era support programs rolling off the books, government expenditures are slated to fall by a further 10% in the coming fiscal year, on top of last year’s 22% plunge (and spending came in $7 billion lower than anticipated) from pandemic highs, before rising at a 2% annual rate over the next four years. By 2026/27, program spending is expected to account for 15% of nominal GDP, a level that is generally consistent with pre-crisis rates. That normalization is a welcome development. However, the continued above pre-crisis trend degree of government spending does emphasize that there is little appetite among fiscal policymakers to support their peers on the monetary side in really trying to clamp down on excess demand. 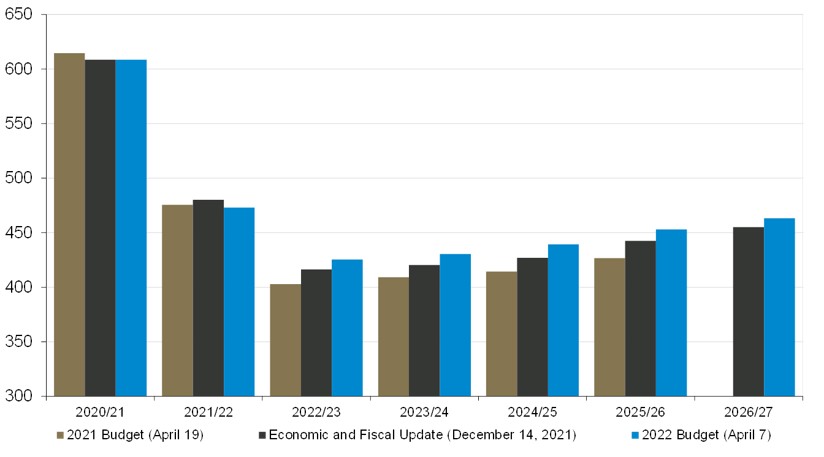 So, revenues have been marked up more than spending, meaning that at least some of the windfall is flowing to the bottom line. The net result of the updated fiscal forecasts is that the projected Budget shortfall was notably smaller for the just-ended fiscal year ($114 billion versus the previously forecast $145 billion), with deficits in out-years marked down as well (by roughly $4 billion per year). It remains the case that there is still no plan to actually close the gap for the foreseeable future. 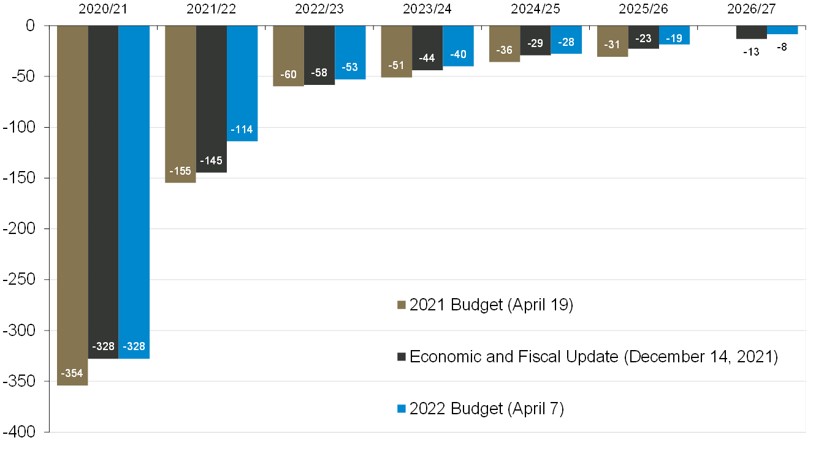 In accordance with the less bad deficit projections, expectations for the growth in federal government debt have been reduced over the projection horizon, with the amount outstanding at the end of 2026/27 now expected to be $50 billion lower than assumed in December, at $1.31 trillion (just under double the balance pre-pandemic). Combine that with the upward revisions to nominal growth forecasts, and that means the debt-to-GDP ratio is projected to be notably lower than previously assumed and to decline in the years to come (versus expectations that it would peak this year). As such, the government is at least sticking to its pledge to reduce this metric — however, the expectation of rising debt and higher interest rates still means that debt service costs are slated to rise, creating less of a bang for each dollar of revenue generated. 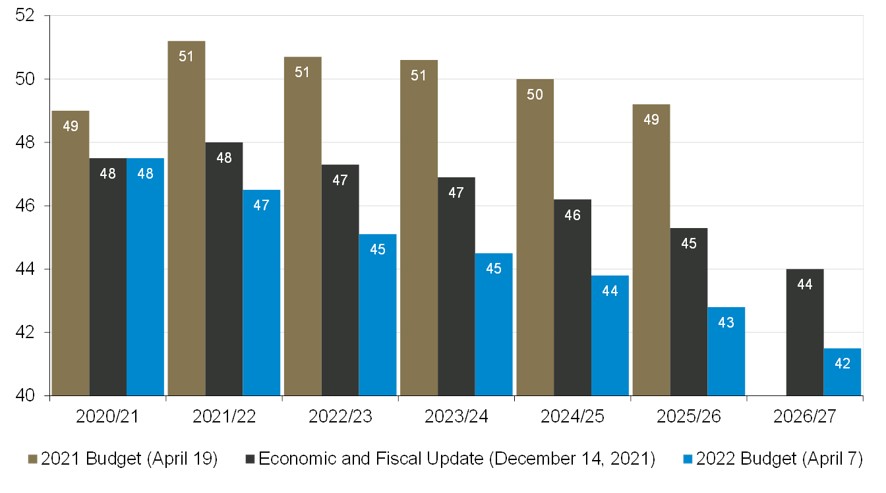 On the topic of debt, the updated debt management strategy⁵ points to a continued reduction of issuance, reflecting a smaller financial requirement for the year and the reduction of cash balances. The government maintained higher cash holdings during the earlier days of the pandemic to address potential uncertain spending needs; excess balances are to be used to offset some financial requirements as the government looks to return to normal government operations. The anticipated $212 billion in gross bond issuance (down $43 billion from last year and less than had been assumed by markets) is a hefty supply of bonds. While the vast majority of that funding is being used to cover bonds coming due (net issuance is estimated to be $30 billion), it is notable that the Bank of Canada holds a large share of outstanding Federal government debt and is looking to let its balance sheet run-off in the coming months, meaning that the bonds will need to be absorbed by more price-sensitive market participants.

The pandemic-era strategy of extending the average maturity of government debt remains in effect, as issuance remains focused on long-term securities — 35% of gross bond issuance is expected to have a maturity of 10 years or more (including further issuance of ultra-long 50-year bonds), down from 45% last year but well above pre-COVID norms of closer to 15%; and the average term to maturity of government market debt is expected to increase to nearly seven years by the end of 2022/23, up roughly two years from where it was in June 2020. The government is also planning for another green bond issuance in the coming year. 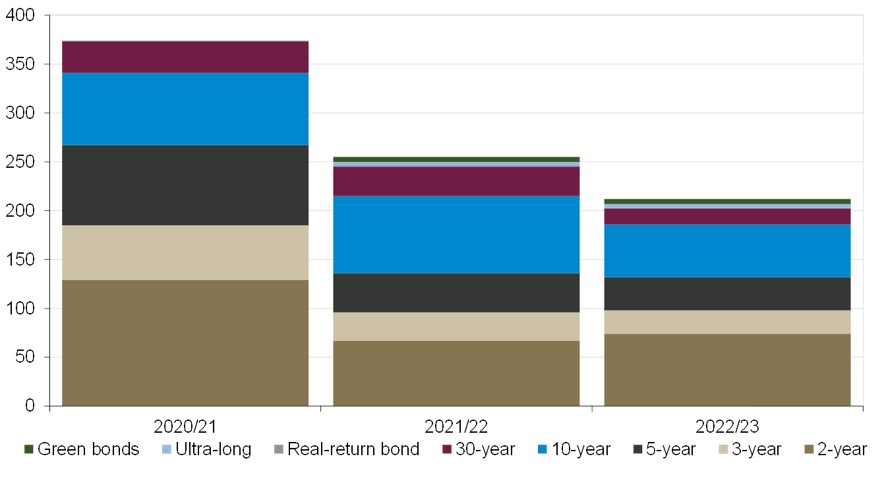 The bottom line is that the underlying strength in the domestic economy has provided the government with an excellent opportunity to make material efforts to get its fiscal house in order. While spending is going to continue to fall from pandemic-crisis levels, the current backdrop would, perhaps, argue for greater fiscal restraint. As it stands, the fiscal plan will do little to help keep an economy that is already back to running at full capacity from overheating, placing the onus squarely on the Bank of Canada.

The market implications of the Budget are limited as most main measures were pre-announced, teased and/or leaked to the media ahead of today’s formal announcements. The ongoing deficits would be currency negative if the rest of the Developed Markets were not in the same boat; the elevated debt issuance into a marketplace where the Bank of Canada is soon to stop buying and policy rates are on the rise is not the most constructive for bonds; the targeting of domestic banks is a known headwind for the sector, and there is little to spin the dial for equities elsewhere.

This commentary is for informational purposes only and does not constitute investment, financial, legal, accounting, tax advice or a recommendation to buy, sell or hold a security. It shall under no circumstances be considered an offer or solicitation to deal in any product or security mentioned herein. It is only intended for the audience to whom it has been distributed and may not be reproduced or redistributed without the consent of Guardian Capital LP. This information is not intended for distribution into any jurisdiction where such distribution is restricted by law or regulation.

The opinions expressed are as of the date of publication and are subject to change without notice. Assumptions, opinions and estimates are provided for illustrative purposes only and are subject to significant limitations. Reliance upon this information is at the sole discretion of the reader. This document includes information concerning financial markets that was developed at a particular point in time. This information is subject to change at any time, without notice, and without update. This commentary may also include forward looking statements concerning anticipated results, circumstances, and expectations regarding future events. Forward-looking statements require assumptions to be made and are, therefore, subject to inherent risks and uncertainties. There is significant risk that predictions and other forward-looking statements will not prove to be accurate. Investing involves risk. Equity markets are volatile and will increase and decrease in response to economic, political, regulatory and other developments. The risks and potential rewards are usually greater for small companies and companies located in emerging markets. Bond markets and fixed-income securities are sensitive to interest rate movements. Inflation, credit and default risks are all associated with fixed income securities. Diversification may not protect against market risk and loss of principal may result. Index returns are for information purposes only and do not represent actual strategy or fund performance. Index performance returns do not reflect the impact of management fees, transaction costs or expenses. Certain information contained in this document has been obtained from external parties which we believe to be reliable, however we cannot guarantee its accuracy. 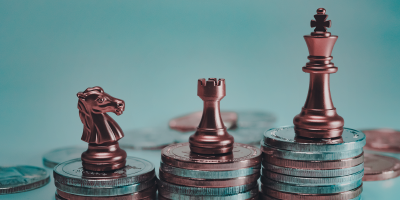 Our H1 2022 Fixed Income Outlook takes a detailed dive on the differences between the latest wave of COVID-19 and those that came before it, the way society and businesses have adapted over the last two years, the outlook for growth and inflation, monetary policy and much more.

Speak to your financial advisor or our team about guarding your prosperity journey today.
END_OF_DOCUMENT_TOKEN_TO_BE_REPLACED